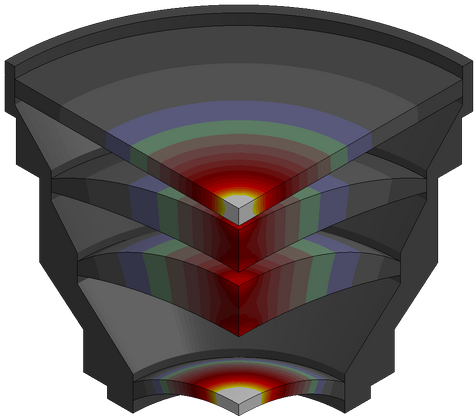 Carried out by the engineering office Tobias Loose

Dr. Loose has worked on the following subproject within the joint project SmartScan:
Simulation-based detection of thermally induced state change of the optical elements of a scanner system for laser metal processing

Technical target parameters of the project
The accuracy requirement for the calculation was defined in the application with a deviation of +/-10 % from trustworthy measured test values.

is 6.5%
The predominant deviation is in the range < 2.5%
The target value has been reached.

Distortion calculation:
When comparing the distortion calculation with the measurement carried out at the TU Ilmenau, a deviation of 5.6% was achieved for lens 1, and a deviation of 15% for lens 3. This can be justified by the fact that in addition to the expansion, there is also a bending of the lens. This leads to uncertainties in the measurements. Therefore, despite exceeding the target of 10%, the result is considered satisfactory. 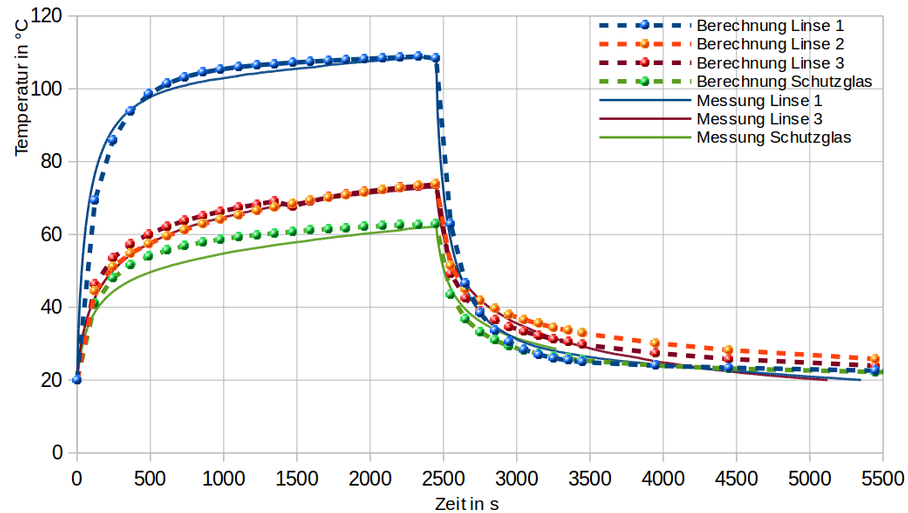 Simulation example from the research project

and the Ernst-Abbe-Hochschule Jena.

The simulation-based detection of thermally induced changes of state of the optical elements of a scanner system for laser material processing subproject covers the simulative part of the overall project. The results of the subproject show that a realistic calculation of the temperature field as well as the deformation behavior of a lens system is possible. Both state variables can be predicted accurately.

For the definition of the heat input, the method of the equivalent heat source known from welding simulation was applied and adapted to the situation of an optical lens system. In doing so, a procedure was developed that allows a target-oriented heat source matching with transferability to similar conditions. The method of equivalent heat source and its adjustment is confirmed by irradiation tests, which were carried out by the project partners TU Ilmenau and FH Jena.

From the investigations on the heat source it could be worked out that the heat input at the lens system occurs predominantly at the surface of the optical elements.

The heat dissipation to the environment is an important parameter in the temperature field calculation, since it determines the equilibrium state, i.e. the state that occurs at infinitely long irradiation time. With the help of irradiation tests carried out by the project partner Optris, a heat transfer coefficient could be determined for the situation in the room without moving air.

Meshing is a crucial aspect for the numerical model. Too low mesh density leads to high calculation times, too low mesh density to losses in the result quality. Within the scope of the project, a mesh size proposal was developed which provides an acceptable result quality for the laser-radiated lens system. The dependence of mesh density and beam diameter was worked out. The temperature field calculations carried out show good agreement with the tests carried out at the project partners.

With the development of an equivalent element, the attempt is made to represent an optical lens system with several lenses by a single lens with equivalent properties. Within the scope of this subproject a method was developed to transfer the temperature field and distortion calculation from the real lens system to the equivalent element. Limitations of this transfer were pointed out. These include the fact that the different heating of individual lenses due to different lens thicknesses can no longer be resolved in the equivalent element. However, the basic feasibility could be demonstrated.

Finally, calculations were performed for the laser beam moving over the lens system. Furthermore, the situation of a real sceneairo for the welding of a car door is exemplarily considered. Essential characteristics of the temperature field and its temporal development could be shown by the simulation. These include the finding that, in the case of a moving laser beam, the heating of the inner regions of the lens is significantly delayed in the case of thicker lenses. The heating of the lens smears over the traversed area to an almost equally heated area. Only the last location of the laser beam shows an increased temperature.

Finally it is stated that the numerical calculation can contribute to the design of the control system to determine the load areas application-related and provide necessary knowledge about the temperature behavior of the optical system.